I paid $200 for this story. I tend to give people the benefit of the doubt. I think people usually at least mean well. Especially with respect to the care of their beloved pets. We as veterinarians aspire to live up to the ultimate pet advocate and humanitarian attributes as is expected of us and we truly must be. Unfortunately, we are a business and cannot be for no profit unless run by a board of directors with disposable funds. We must maintain our overhead that is relentlessly increasing. But times are tough. I did not know how low a human being can go and still function.

I was called to the North San Fernando Valley area midday this week for a cat in need of a pain shot. Or so the owner says. I have to prepare for a housecall by envisioning the coming scenario based on information obtained and experience with certain regions in the Greater Los Angeles Area that we serve. Let’s just say this area was hit by the recession… the one prior to the current recession and never recovered from that. The house was in decay. The stucco had separated from the withered door frame. There was a large yard with multiple random oldish vehicles. I peered across the street. That house was boarded up. I knocked and heard rustling. I had called the owner a few minutes prior to alert her I had arrived. She said she was brushing her teeth and would be right out. A hefty Hispanic man in boxers showed me in. The house was well-lived in by a family of 5-6 as far as I could tell. The owner emerged with a toothbrush in her mouth from a “back room” that 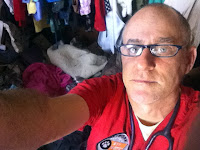 appeared to be a service porch or closet (?). A kitten scampered out. Not the patient. She apologized for the delay and declared she broke a nail… and a tooth! just then. “Oh my, are you OK?” I asked. She assured me she was. The owner was an attractive woman but somehow looked a bit older and permanently exhausted. She led me into her closet-home in the back of the house. The back door that separates the closet from the yard was worn and unsecured. The closet had a bed, a TV, a dresser, a rack of clothes and a pile of clothes. In the closet of the closet was the patient. Supposedly 18 years old, the skinny gray shorthair had rapid breathing and was squeaky-laboured. One eye seemed more open than the other. His temp was low. His mouth…was rotten. So bad that his upper jaw was severely infected and eaten away. His tongue was severely ulcerated from the direct contact on that side. He was emaciated and dehydrated 10 percent. His cry was a cross between a baby wailing in the distance and a creaky rocking chair.

She wanted a pain shot for him.

I explained that her cat was is an inhumane condition and needs either to be hospitalized, stabilized and, if possible, operated on in order to save him or he must be put down. I told her what I could do there was limited. She could not afford treating the cat as explained. She also thought killing him was wrong. She denied any religious reason. Just thought it was wrong.

The smell of closet-room was noticeably more foul since I opened the cat’s mouth and got a nice whiff. I wanted to tell her she was living in an inhumane state as well. It was then she said she couldn’t really pay us. Her boyfriend was going to give a credit card over the phone for any treatment. I gave her a long heart-to heart about how she needs to let the cat go and stop his suffering, but she wouldn’t have it. She said that all the other vets said that, bu that’s not what she wanted to hear. Her cat was her beloved. She wanted him to be out of pain. I told her anything I give is temporary, he really needs hospitalization, but his longevity and advanced shocky state is against him. She told me about her mom dying with little or no care in some home somewhere with cancer and no pain meds. She just wanted some for her kitty. In her attempt to show how much life was still in him, she opened a couple cans of food. The cat circled and seemed very interested but, alas, could not partake. He went on whine-creaking and stinking up the air. She went on to tell me the sad story of her life. She lost her 4 bedroom home and was held hostage for 5 days in her own house by crooks. “What?!” This is getting ridiculous I was thinking, when I kid you not, two gunshots go off in the backyard over the fence or VERY nearby. What was that?! It sounded like a .45… She corrected me and stated more like a .38 and then a 9mm. (I’m thinking: why do you know that?!) Her boyfriend was finally reached at work and she handed her disgustingly soiled cell phone to me to get his payment info which I texted to dispatch. I’m thinking. This is going to decline… Decline (dispatch texts me). Great I had been there an hour already and had another appointment back on the Westside. Oops, I discover. The boyfriend repeated the number and I was one digit off. Gave dispatch the correct number…Phew…DECLINED…!?!…At that point I just wanted to put the cat to sleep for free and get the hell outta there…She persists and wants me to treat him. Just get him out of his pain, Doc. Even for a little while. I AM HAVING TEXT WARS WITH DISPATCH over not pre-authorizing payment and for sending me to this forsaken land. All the while the owner is primping herself in the wall mirror(?!?) telling me how she lost everything, her car, she had to move into her boyfriend’s house and then they eventually had to cram into the closet-room while he rented out the rest of the house to the family of six. Oh and then I notice there’s also crippled dog out in the back. Her boyfriend told me over the phone (mine now, since hers had died or the minutes ran out, not sure which) that he could meet me in a few hours and pay cash. But that was not feasible. He could not come up with another credit card. Then he hung up or lost signal or was busted at work for talking on company time. I was so frustrated and felt so bad for the cat I finally agreed to give the cat a big shot of pain killer. Even as I was leaving, was she scrambling through her overflowing (with junk) dresser drawers in search of a valid, non-expired credit card. I had told her if her boyfriend wants to bring the cat to our clinic and some of the payment I would try and save the cat. But for how long? He was 18. She was a lost soul. Said she couldn’t work cause she couldn’t ever show up on time.(What?!?) Or do anything for that matter. I felt sorry for her and her cat and the whole neighborhood. I dodged some bullets and headed back over the hill to Civilization.

My Westside appointment had two cats in need of workups and dental work. These folks were able to handle it and invest in the care of their pets. I hope the gray cat doesn’t suffer much longer.