You enter the backyard of two dogs that

have been fighting. It’s just their house now. Then you hear about the manchild who lived there in Florence on his mother’s good graces and has left his dogs at the boarded up house. But he did leave a dog house for the dogs. And a garage. The mother comes to feed the dogs every day for the

son. The son bought another house in another neighborhood but he didn’t want those dogs. They have been fighting and he doesn’t wanna DEAL with it. The dogs fought over chicken his mom brought them. You and Tech creep further into the backyard to find one of the dogs cowering inside his house. You catch the characteristic whiff of infected bite wounds. Kona the Akita (not her real name) is real bitten up. Terrible thing. You and Tech have to rope and pry her from her wood house in order to help her. Tech finds the other dog, a Mastiff, wagging her tail inside the garage. She’s got cuts on her head, but she’s gotten the least of it. The mother tells you how the son is not very responsible. He told her that it was her fault that they fought. Now you have to take the dog to hospital and Kona’s not feeling so hot but will after the pain shot you gave kicks in.

On the drive back to the Westside and a stop at Critical Care to hospitalize Kona you reminisce about all the homes you have been to and all the diverse living situations for pets in their owner’s environment. From the girl who lived in a closet with her cat, to the toy dog running down the long corridor that is the b

athroom/dressing room – powder room in some Starlet’s mansion. Pets seem to adapt and adopt to their owner’s and their surroundings. They make do with the space that they have. They don’t pine for more space and find their place in a huge space. Pet’s don’t seem to mind the clutter you often discover upon entering their domain. They simply make their home in the junk around the junk through the junk. You tell Tech the story about the guy with two Great Danes (since passed away) and about his business, sport or pastime rescuing cats and their offspring. They live and breed within the junk pile. The wall of stuff dividing the room: chairs entwined with boxes and a BIKE and garden tools and a kitten comes out of there running through your legs out the door.

You sleep very little that night and the kids act up and the dogs bark at the squirrels and the mowers and blowers go off you go back at it and in no time you are back déjà vu at ANOTHER DOGFIGHT where the poor victim lives 40 crooked concrete steps above the street and you know how this is going to end with a large body coming down and your tech is out of cell range and dispatch did not acquire this information and now you need to make a new Rule. After passing two cabled bark-lunging pit mixes outside the rescue woman leads you into her abode where you enter the cozy cluttered room and the strong odor of kennel bum rushes into your lungs but somehow you instantly adapt. The poor, hairy Wookie on the floor is a mess of pink water and wounds. You labor dripping sweat shaving the anesthetized beast and finding extensive bruising with internal issues as well as a lot of swiss cheese skin who’s holes you debride and reduce with proper drainage but no matter what you do this puppy’s going to heaven. The new rescue bumped off the old Chow King and took his place. You console the owner as she curses the new dog.

Before you know it is night again and this night’s dog horror show is going to be the topper. Cause it’s Saturday Night! Time to party down dogs. Who’s it going to be? Nevermind you just finished up your “last call” at 9PM in time for dinner under the tin foil to be heated in the micro. It’s time for the Main Event. You are waiting and drifting and leaning elbow on the laptop making ghhhhhhhhhhhhhhhhhhhh till you jolt awake to the buzzing of the iPhone it’s the Service and there’s a dog fight. Unfarkingbelievable. How did you know? Everything comes in threes you know. Groggily you attempt to determine the situation. There are two labs. The original dog and the new dog. New D has been quite a sore thumb lately. He’s aggressive. Finally tonight, Original D took offense to New D fronting like that and gave him a beat down. You hear more of the 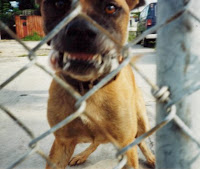 story and you gather additional pertinent facts that New D has been aggressive towards the family and they are quite afraid of him. They are trying to find him a home good luck without extensive behavioral evaluation medication and the risk of bodily harm where’s Cesar Milan when you think you need him? You ponder the possibilities: a usually very loyal loving breed like the Labrador turns on owners and the odds of a sociopathic brain disorder become exceedingly good in this case. And as dispatch is unable to approve the owner’s payment the owner tells you that she’s calling you from OUTSIDE THE HOUSE. She can’t go back in. The New D is in such severe pain he won’t let her back in the house. She wants YOU to go in there the late Steve Irwin style and sedate New D and get him out of there but it dawns on you that Animal Control would be perfect in this instance and she takes your advice. Can’t we all just get along?