MORE ON THE H1N1 SWINE FLU IN PETS 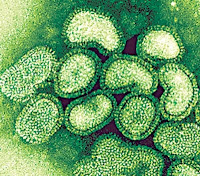 There have been several confirmed cases of H1N1swine flu infection in domestic dogs and cats. The latest case was found in Los Angeles by a local veterinarian just 4 days ago. All of these animals have appeared to have acquired the disease from an infected human being. The symptoms are much the same as seen in the human involving the respiratory tract. Sneezing, nasal dischage, coughing, weakness and fever are usually present. Nationwide, there have been several reported cases in animals, including cats, ferrets, turkeys, swine, a cheetah, and most recently a dog in New York. Elsewhere in the world, the virus has been detected in swine, turkeys and dogs (2 in China). While transmission of this virus to animals appears to be rare, it is still important for individuals with influenza-like illness to take precautions which will minimize spread of the virus to both humans and animals.

People can keep their pets healthy by washing their hands, covering their coughs and sneezes, and minimizing their contact with their pets when they are ill. If a pet becomes ill, they should consult their veterinarian.