You enter a yard a barking leaping Boxer named after a famous one greets you behind a sideways removed room door leaned to block him and his housemates. The Boxer just returned from neutering at the shelter and still had his testosterone enough to rip a hole in the shepherd mix now nipping at your pants, ripping the invoice from your hand. The caretaker apologizes while attempting to herd the 4 dogs on the deck into the house. You avoid loss of appendage and anesthetize the victim of the Boxer’s Tyson-like bite enough to repair said injury. 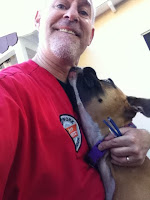 You are presented another dog as the caretaker tells the sad story of her family’s wrongdoings and the lawyers and police and animal control’s wrongdoings. The neighbors are certainly doing her wrong with complaints of barking and public nuisance of whom she claims called the POLICE from their vacation home in another State. You examine the subordinate Pitbull that did receive a superficial gash. You treat this as well while enduring additional fantastical stories of lost chances, wealth and real estate.

On your way out the Boxer leaps up to you paws on your shoulders and you take his arms and dance with him clownishly to snap the woman from her funk knowing full well this dog is exhibiting pure dominant behavior. You advise the caretaker of your concerns that the injuries will continue and yet she assures you the dogs are undergoing training and she simply loves them while attempting to corral them barking command after command. You had put a rebel dog T-shirt on the victim and she looks very cute while now awake from the anesthesia enough to nip at your pants and herd you out past the heavy door and broken gate. Give the antibiotics and pain meds you say with a smile. 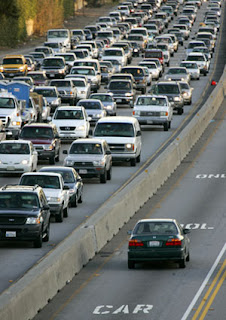 You head up the 405 through that lovely Sepulveda pass becoming ever wider accelerating erosion on a grand scale simply to allow many more lanes of cars crammed along side you after this coming CARMAGEDDON… Lord save the poor animals in need of emergency attention in their homes. Except that 911 VETS will have PROVIDERS on both sides of the BLOCKADE TO the two civilizations: Valley Tribes and Westside Tribes. Fear not you think. You hope. As you reach your destination your thoughts turn to a helicopter service that airlifts pets from the home to the ASEC or AEEC or AEC ASG or many other 24-hour emergency clinics. Not yet, you think.

There’s a feral cat on the driveway with impossible dreadlocks.

You rush around with the kids on Sunday and mix in a few housecalls until late afternoon when the family is begging you to hang out and start the barbeque when a call from the Service transfers you to the same caretaker with four dogs… who suddenly has none. You discover the Boxer attacked the others again and turned on the woman trying to pry them apart ripping gashes in her arm sending her to the ER for repairs. The Boxer now awaits trial in the County Shelter from whence he came. A nice dog who simply needs to live as the only dog but now has a scarlet letter of red tainting him for future adoptability due to liability. The rebel dog and the cohorts now reside in doggy sleepover camp for a piece. Hopefully together away from the others.

You recommend the woman receive adequate care except that her Insurance company is guilty of wrongdoing as is the Emergency Room. You hold fast to your non-culpability in the incident as a wrongdoer and remain the champion of animals you think you are. You envision a bark-free night on her block as the poor woman heals from a tough lesson in dog pack management.

The Service wakes you again at 3:45AM. Monday starts early this week.